A symbol of recovery from devastating rains in western Japan

Hiroshima Plant commenced the operations on June 1, 2020 as a new production site to replace Hongo Plant that was shut down due to flooding caused by torrential rains that hit western Japan in July 2018. Including Horoshima Prefecture Governor Mr. Yuzaki and Mihama City Mayor Mr. Okada, many stakeholders attended the ceremony, and our Representative Director and President Calin Dragan expressed his gratitude once again for everyone who dedicated their efforts in the start of the operations at this new plant in merely 2 years after the disaster.

Leveraging automated production lines and the latest IoT technologies, Hiroshima Plant has improved the efficiency of the production and controlling processes and employed 2 aseptic lines capable of manufacturing small and large PET bottle drinks.  Equipped with the production capacity that is about 1.5 time larger than that of Hongo Plant, Hiroshima Plant will play a core role in supplying products in the Chugoku and Shikoku areas. In efforts to become a symbol of reconstruction for not only our employees but also the people in the community, we will further contribute to the recovery and development of the community through the new Hiroshima Plant and deliver safe, secure, and valuable products, including "Coca-Cola", to everyone. 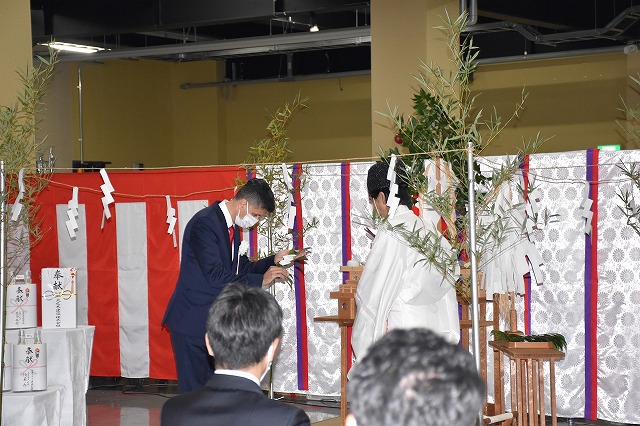 ▲ Offering of tamagushi by Calin Dragan 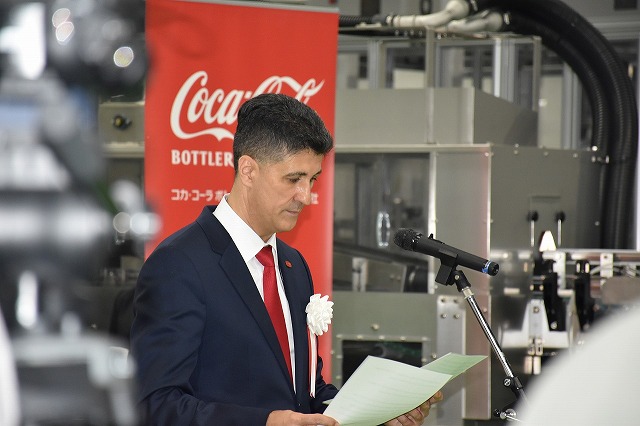 The construction of Coca-Cola Bottlers Japan Hiroshima Plant was successfully completed, and we are able to present it in front of you here today. This success is a result of your daily support and cooperation, and I would like to express my sincere gratitude to all of you.

After a number of discussions to swiftly resume the operations of Hongo Plant, which sustained serious damage from the heavy rains in western Japan in July 2018, and we made a decision in October of the same year to introduce 2 aseptic PET bottle production lines. In the very tight time frame of merely 1 year and 7 months after the decision, and despite the various pressures from the COVID-19 crisis, we were able to achieve the first production on Line 1 on June 1 this year and Line 2 on July 3, thanks to your great efforts. I would like to thank you once again for your dedication.

We will further advance the product testing and commercialization processes with new technologies and work on the creation of value and prosperity of the beverage market.

Furthermore, our new plant tour facilities have also been completed. I hope it will become one of the tourist spots loved by everyone in Mihara City.  Thank you.

*Please note that the information contained in this news release is as of the date of release. Some information may have changed since then.