Coca-Cola Bottlers Japan Inc. (Headquarters in Minato-ku, Tokyo; Representative Director & President Calin Dragan; hereafter "CCBJI") constructed a new plant that replaces Hongo Plant as the “new Hiroshima Plant” in Mihara City, Hiroshima Prefecture same as Hongo Plant, and started its operation on June 1 (Monday). Hongo Plant had been suspended its operation after severely damaged by the flooding due to the heavy rains in the western Japan in July 2018.

On Friday, June 12, we made courtesy visits to Hiroshima Prefecture Governor Yuzaki and Mihara City Mayor Tenma as below, where we reported the launch of our new plant and presented 3 cases of Sokenbicha 600ml PET and Aquarius 2L PET respectively, which were the first products produced in the plant. 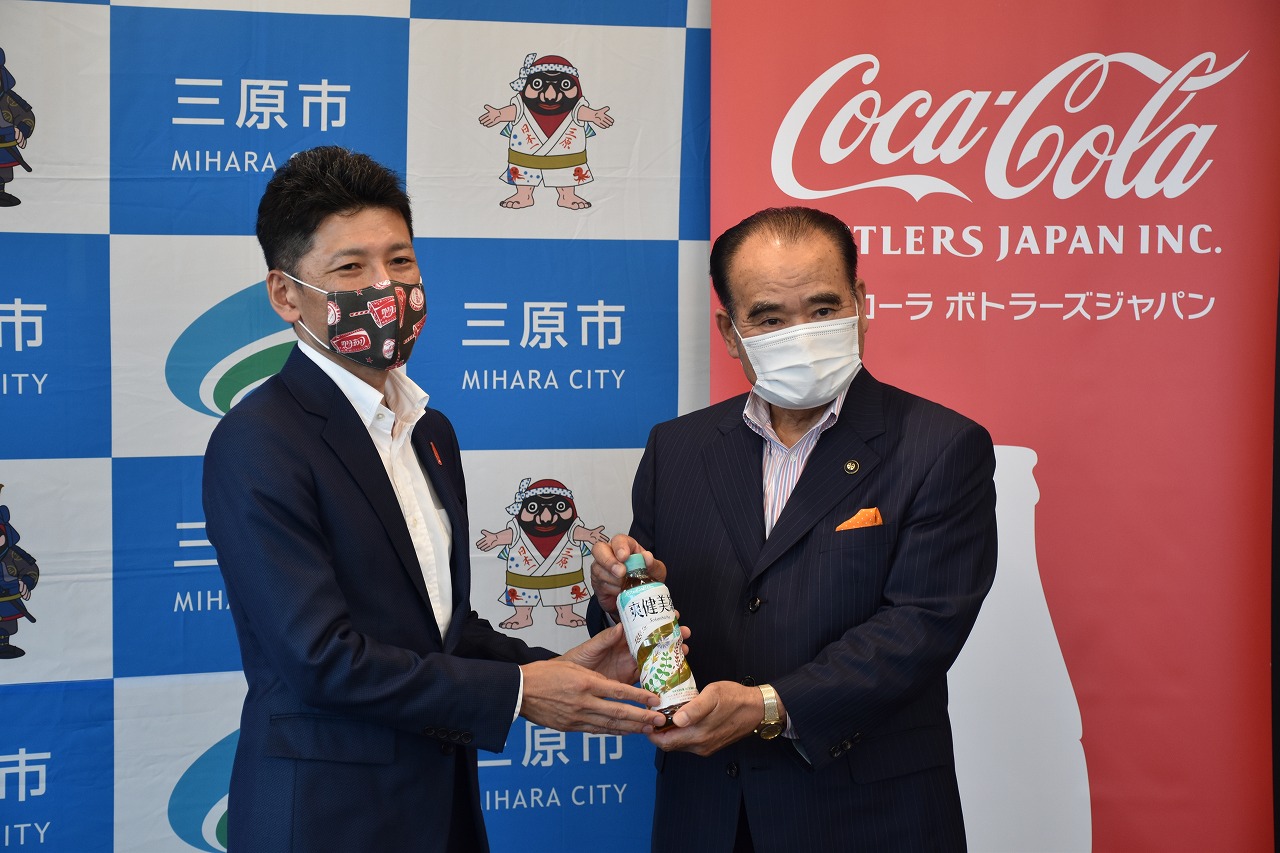 I assume you have had a hard time to resume your plant in a short period of time.

And I am grateful that you made a management decision to establish a plant in Hiroshima Prefecture to continue your business.

With the plant tour, etc., I expect that the plant will significantly contribute to the economy of Hiroshima Prefecture.

In the upcoming season, I’ll recommend many people to drink Coca-Cola products produced at Hiroshima Plant also as an anti-heatstroke measure.

I am grateful that you made a management decision to establish a plant in Mihara City to continue your business.

I have heard that Hiroshima Plant is a cutting-edge plant with many new technologies including high-efficiency facilities and IoT.

With the great plant tour facility, I expect that the new plant will become a symbol for the citizens of Mihara City.

We would like to work together with CCBJI for the development of the local economy.

When being hit by the disaster, we didn't know what we should start with in order to recover from the situation, however, after only 3 months, we set a target to resume its operation by the Olympic Games Tokyo 2020.

And thanks to the supports from many people, we successfully resumed the operation fast in 1 year and 11 months.

By automating the manufacturing lines and introducing the state-of-the-art IoT technologies at the world's top level plant, we realized efficiency and energy savings.

We will make Hiroshima Plant a symbol of reconstruction, and contribute to the development of local community as a plant which is loved by all.

Through the brand/products of "Coca-Cola", we will deliver happy moments and values for all.

*1 Currently, only Line 1 is in operation. Line 2 will be in operation in the third quarter.