Coca-Cola Bottlers Japan Inc. (Headquarters in Minato-ku, Tokyo; Representative Director & President Calin Dragan; hereafter “CCBJI”) donated part of its sales proceeds of the foods for specified health use and foods with functional claims sold in Kagawa, based on its “Health Promotion Agreement” with the prefecture.

This initiative is implemented every year based on the "Health Promotion Agreement", which was concluded with Kagawa Prefecture in October 2017, and the donation was made for the third time this year. The donation has been utilized for the prefectural project related to promotion of measures against life-style related diseases, such as "My Challe Kagawa!", a Kagawa health point project to promote health while having fun. The donation for this year was finalized based on the annual sales volume from April 2019 to March 2020, and the payment has been completed on May 20.

Previously, we used to visit the Kagawa Prefectural Office to carry out a donation certificate presentation ceremony, however, from the perspective of preventing the spread of COVID-19, we didn't do it this year.

Under our corporate philosophy to “Deliver happy moments to everyone while creating values”, CCBJI will remain committed to CSV (Creating Shared Value) and provide solutions through our business to the challenges that regions are faced with, and continue to seek for collaboration with all our partners.

・ Foods for specified health use: 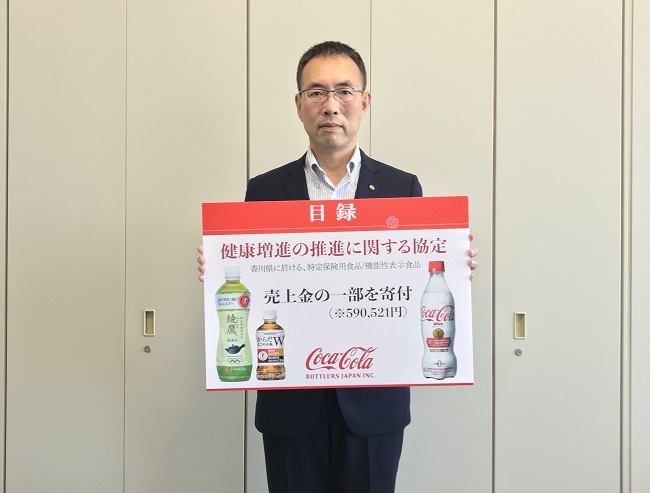 Everyday health challenge! My Challe Kagawa! The URL for the special website is as below.