William Tupou, a member of Coca-Cola Red Sparks, the rugby team of Coca-Cola Bottlers Japan Inc. (Headquarters in Minato-ku, Tokyo; Representative Director & President Calin Dragan), visited Fukuoka Prefectural Office and Fukuoka City Hall in Fukuoka Prefecture where the rugby team is located, as well as our headquarters to report on "Rugby World Cup 2019,” which he participated in as a member of the Japan national team.

William played in the starting lineup in the two matches (against Russia and Scotland) of Rugby World Cup 2019, held from Sept. 20 for the first time in Asia, where he showed outstanding performance and contributed significantly to the national team. As a particularly memorable experience, William shed light on the behind-the-scenes details of the fierce battle against Scotland, which was to determine Japan’s advancement to the quarterfinals, in which he suffered a concussion and lost all memory up to the last 10 minutes of the game, but masterfully gave an offload pass while collapsing, which led to a try for the team.

He also expressed words of gratitude for the support of the Coca-Cola family for allowing him to play on the Japan national team and declared his resolve to reaffirm his responsibilities and continue to work hard for Coca-Cola Red Sparks to become “one team”.

Furthermore, Top Challenge League 2019 kicked off on Friday, Nov. 15. We hope you visit the games and support William Tupou and Coca-Cola Red Sparks on site. 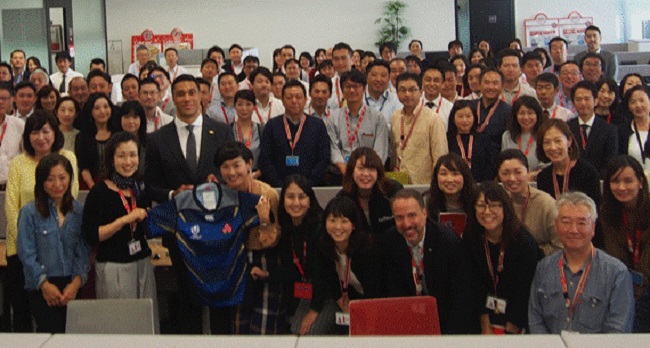