Working towards a “World Without Waste," the Coca-Cola system joins “International Coastal Cleanup” and undertakes cleanup activities over 17 locations nationwide

■About the ICC
The world’s largest coastal cleanup initiative, the CCC, was initiated and is hosted by the Ocean Conservancy, the leading marine conservation organization in the United States founded as a center for marine environmental education. The voluntary cleanup activities are carried out around the world during the same period of the year (September-October). During the cleanup, a standardized data collection method is used to record each trash collected. The data collected from around the world is used to create solutions to the global issue of marine debris.

The Coca-Cola Company, as the Lead Supporting Partner of the ICC, has been supporting their initiatives all around the world. The cleanup initiative started in Japan in 2007. Employees of Coca-Cola Japan and affiliate firms of the Coca-Cola system have so far taken part in coast cleanup volunteer activities in various locations throughout Japan, including Lake Biwa; Yakushima island; Shichigahama coast in Miyagi Prefecture; the area around Tone River in Joso; Ibaraki Prefecture; Okinawa Prefecture; Tsurigasaki coast in Chiba Prefecture; and Morioka, Iwate Prefecture. The Coca-Cola system plans to make a united effort to strengthen the activities.

■Reasons why the Coca-Cola system is committed to the cleanup activities – taking initiative in establishing the recycling-based society by promote the recycling of plastic resources
Based on the global vision “World Without Waste,” the Coca-Cola system in Japan defined “2030 Packaging Vision” in January 2018, which consists of three pillars of “Design,” “Collection,” and “Partners." The Coca-Cola system in Japan also announced its new environmental goals including accelerating achievement of the original targets in July 2019. Through promoting “bottle-to-bottle*’’ initiatives, it set numerical targets specific to Japan, goals that are even higher than global targets, such as shifting the PET bottle materials to 100% sustainable ones by 2030, and by promoting “bottle to bottle” recycling, and is now dedicating its efforts in achieving such targets. (*Note: Bottle-to-Bottle initiatives are to collect and recycle used PET bottles and reuse as new PET bottles for drinks.)

In May, 2021, the Coca-Cola system in Japan introduced 100% recycled PET bottles for its flagship products such as Coca-Cola and others. In addition, it has added the “Help Us Recycle” logo to the packaging of all recyclable products as part of its educational activities to promote consumers’ awareness regarding this issue. In order to promote proper collection and recycling of used bottles, the Coca-Cola system in Japan is actively working with our partners on its bottle collection initiative. It aims to collect PET bottles of an amount equivalent to that of the products we sell in Japan by 2030.

■Features of this cleanup program

For this cleanup program, there are several new approaches that the Coca-Cola system is taking for the first time.

・Using anti-litter social media “Pirika” for the first time to engage in cleanup activities in a new format that can avoid getting into close contact with other volunteers.

・Upcycling the collected used plastic caps to coasters through the collaboration with Greenbird・  Utilizing J-Credits purchased from Nippon Paper to offset the CO2 emitted annually from 2,000 vending machines, which is contributing to increasing the awareness of employees in the Coca-Cola system on the importance of reducing CO2 emissions.

＜Anti-litter social media “Pirika” (Pirika Inc. / Pirika Association)＞
The inception of Pirika dates back to 2011 when a group of like-minded university students formed an informal project in the school laboratory with a shared aim to find solutions to all environmental issues through the power of science and technology. They incorporated the project that same year and decided to address the problem of natural pollution (caused especially by plastics) as the first theme to tackle among many other environmental issues.

Anti-litter social media “Pirika” was released on May 15, 2011. Since then, a total of approximately 190 million pieces of litter have been picked up cumulatively in 109 countries (as of September 27, 2021). The total number of “Thank you” messages exchanged through this media are now close to reaching 10 million messages, indicating clearly how much communication have been generated  between all those participating in the cleanup activities. Over 800 companies, governments and other organizations are currently supporting Pirika, and the number is continuing to grow through the increase of people interested in SDGs in recent years and the changes to more environment-friendly behavioral and consumption patterns that are steadily spreading in various parts of the society.

<Collaboration with Nippon Paper＞
The Coca-Cola system, with the intention to raise the awareness of its employees on the importance of reducing CO2 emissions has decided to offset the CO2 emitted annually from approximately 2,000 vending machines by using the J-Credits※ generated by Nippon Paper (headquartered in Chiyoda-ku, Tokyo; Representative Director & President Touru Nozawa) through the forest thinning project carried in the Kitayama region located at the base of Mt. Fuji as the first action of the comprehensive sustainability initiative defined under the “Basic Agreement on the Collaboration for Building a Sustainable Society” that was signed by and between Nippon Paper and the Coca-Cola system on August 1, 2021.
※1 J-Credit: A government-supported scheme to convert the amount of greenhouse gas emission reduced or absorbed through the implementation of energy-saving equipment and innovative forest management initiatives into credits. 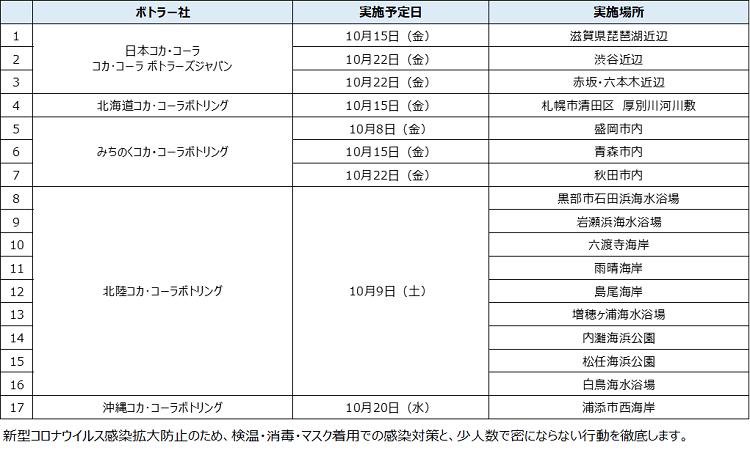 The Coca-Cola system in Japan includes Coca-Cola (Japan) Co.･ Ltd. and its five bottling partners around Japan. In accordance with its business purpose to “Refresh the World. Make a Difference,” the system is committed to creating a sustainable business and shared future that makes a difference surrounding important challenges facing Japan. In 2020, it identified three platforms—Inclusion, Communities and Resources—and nine priority issues, and established a common sustainability framework across the system. With the aim of addressing social challenges though its business activities in each field, it will also contribute to achieving the Sustainable Development Goals (SDGs). Please refer to the latest Sustainability Report for details of these activities. 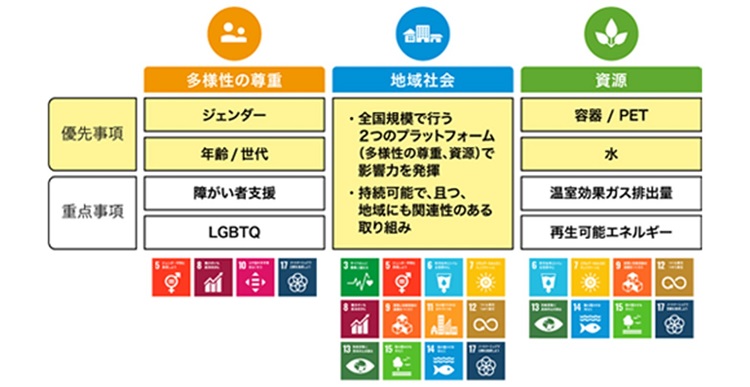