Coca-Cola Bottlers Japan Inc. (Headquarters in Minato-ku, Tokyo; Representative Director and President Calin Dragan; hereafter “CCBJI”) donated a part of the sales from "Coca-Cola" Slim Bottle Aizu Design with a hope that it would be useful to promote tourism in Aizuwakamatsu City. On March 23, the company made a courtesy call on Shohei Muroi, Mayor of Aizuwakamatsu City, and presented a list of donations.

"Coca-Cola" Slim Bottle Aizu Design is a limited-edition bottle available only in regions around Aizu, featuring iconic illustrations of Tsurugajo Castle, Akabeko, and Okiagari koboshi. Although this bottle was once discontinued, it has been well received by customers and is scheduled to be resold mainly at souvenir stores, supermarkets, and vending machines from March 29, 2021.

【Donation to Aizu Wakamatsu City for the Promotion of Tourism】 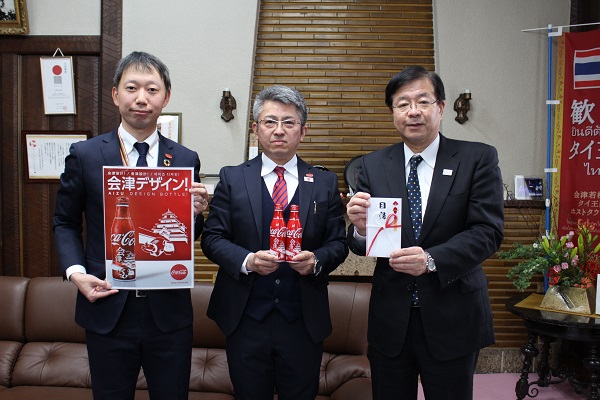 In accordance with its corporate philosophy collectively represented by the motto, “Paint it RED! Mirai o nurikaero (Let’s repaint our future)”, the company aims at fulfilling its mission to “deliver happy moments to everyone while creating value” and continuing to join hands with various partners going forward to work on creating shared value through its business activities to address the challenges faced by local communities.

Since June 2017, the company has been designing bottles with regional symbols and tourist spots across Japan and selling them locally in limited volume as a special package to make travel more enjoyable. The company so far marketed 33 variations, which enjoy popularity among lots of people as a perfect souvenir.

”Coca-Cola” Slim Bottle is a premium package with aluminum material that has inherited the iconic curvy shape of the Contour Bottle, which is so distinctive that you can tell it is a Coca-Cola if you feel it even in the dark. The ice-cold feel of the bottle will make Coca-Cola more tasty and refreshing.

Since its first arrival in Japan in July 2015, the company has released regional designs depicting tourist attractions and symbols all over Japan, as well as seasonal designs such as cherry blossoms, fireworks, and autumn leaves. In 2019, Japan Rugby team jersey design bottle was released, which was enjoyed by many people from "Coca-Cola" fans to those who do not usually drink carbonated beverages.